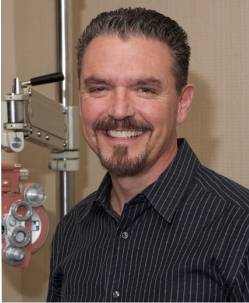 Dr. Eric Leser is one of the practice owners who is making it possible for Dr. Melnik to cut back his schedule and enjoy life. Dr. Leser grew up in Granada Hills so being at Granada Hills Optometry Center is really “coming home” for him. He attended UCLA and CSUN as an undergraduate and completed his Doctorate in Optometry at the Southern California College of Optometry (SCCO). Dr. Leser graduated with honors and received the Bausch &Lomb Outstanding Contact Lens Clinician Award. He enjoys being able to fit patients in contact lenses who have been told they can’t wear them. He was never any good at listening to those who said “you can’t.”

Dr. Leser brings with him teaching experience having taught in the Contact Lens Department at SCCO. He also served as an Assistant Chief Examiner as well as a senior and supervisory examiner with the National Board of Examiners in Optometry (NBEO), the organization that administers licensure examinations for over 40 states. Dr. Leser’s wife is also an optometrist who practices here in Granada Hills on Mondays and spends the rest of her time in their Woodland Hills office. When he is not working, he likes to spend time travelling with Dr. Leung and goofing around with his 2 children. However, someday he may be working with them instead of goofing around with them as they have both said they have not ruled out the family business as a career choice.